Skip to the content
After a major renovation, Capital Building has been transformed into the elegant Capitol Piazza housing many international luxury brands and famous international restaurants.
My doctors decided that they had enough of Tung Lok and they want to have a change, so it was decided that  we shall have our annual Chinese New Year dinner at the renowned Four Seasons Chinese Restaurant at Capitol Piazza. 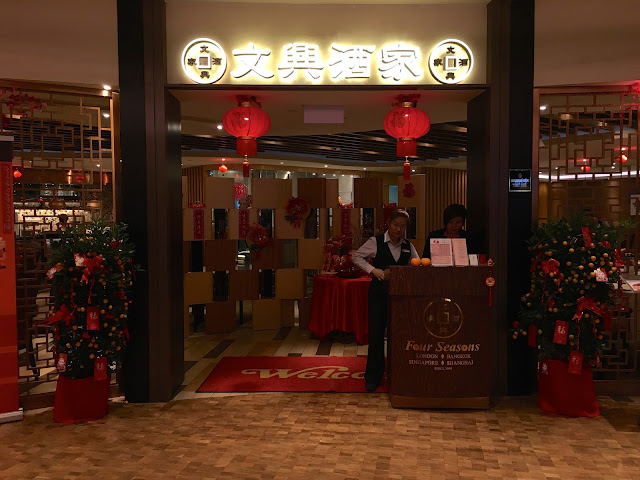 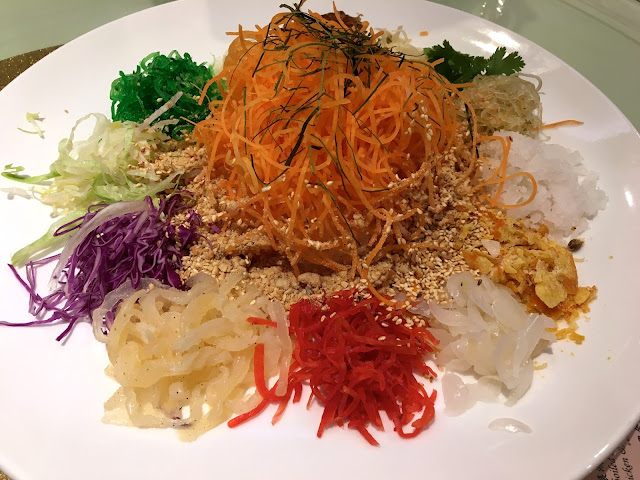 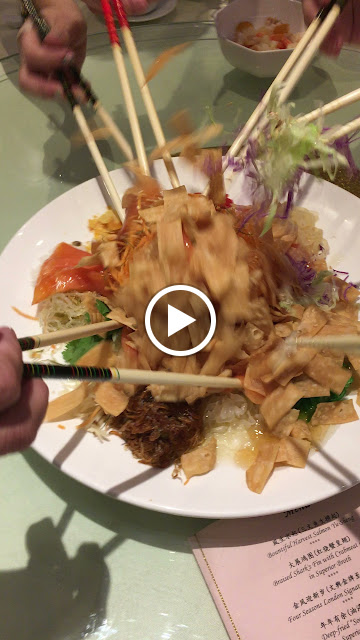 What is a Chinese New Year meal without yu-sheng? At Four Seasons, it is named Bountiful Harvest Salmon Yu-Sheng 风生水起 (三文鱼生捞起). Smoked salmon is used instead of raw fish, mixed with shredded vegetables and tossed with a variety of sauces and condiments. I was kind of expecting the yu-sheng to be served in exquisitely-designed tableware, but it was served on a very normal-looking giant plate instead. 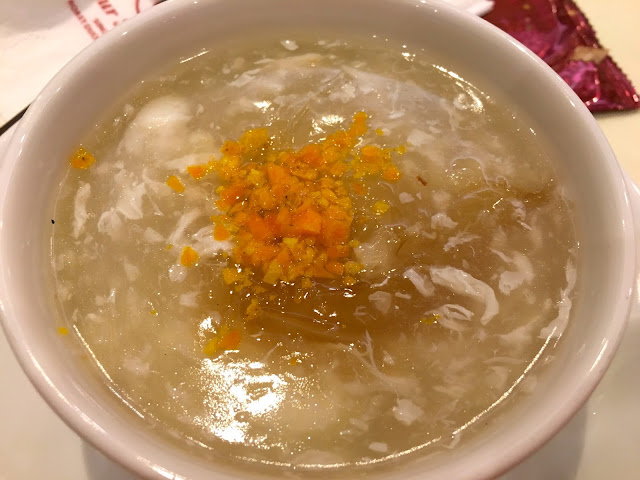 I know I should probably stop eating shark’s fin, but Braised Shark’s Fin with Crabmeat & Roe in Superior Broth 大展宏图 (红烧皇蟹翅) is simply too good to pass up. The clear broth is peppered with detectable morsels of crabmeat, there is a whole piece of shark’s fin in the middle, and topped with crab roe. I do feel that the crab roe is a little dry, it is otherwise faultless. 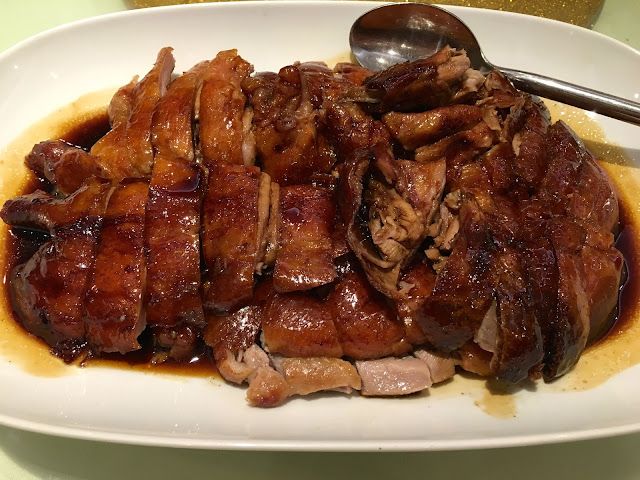 This is the famous Four Seasons London Signature Roast Duck 今逢迎新岁 (文兴金牌至尊烧鸭). I was really expecting a whole roasted duck but this is the Cantonese style where the duck is cut up and served with soya sauce. It’s a little too salty for me and the meat is a little tough but my colleagues and doctors enjoyed it immensely. 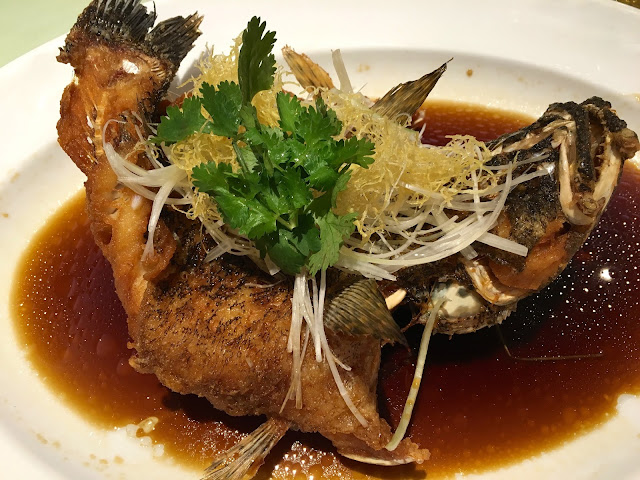 To tell you the truth, I was a little worried when I saw deep-fried fish on the menu because I did not have a very good experience with A-Ond Claypot House’s Deep Fried Seabass with Tangy Speciality Sauce, but Deep-fried “Soon Hock” Fish in Superior Soya Sauce 年年有余 (油浸笋壳鱼) is really delightfully light and crispy. Everything is so throughly fried, you can even eat the bones! 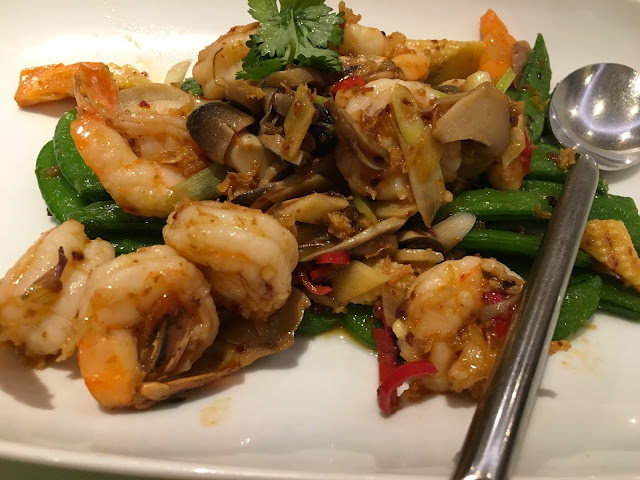 Sauteed Fresh Prawn with Honey Bean in Homemade XO Chilli Sauce 哈哈甜笑 (XO酱蜜豆炒虾球) is definitely a crowd-pleaser. Fresh succulent prawns are stir-fried with honey and the restaurant homemade XO chili sauce, giving you a dish that has a fiery kick yet sweet enough to make you long for more. 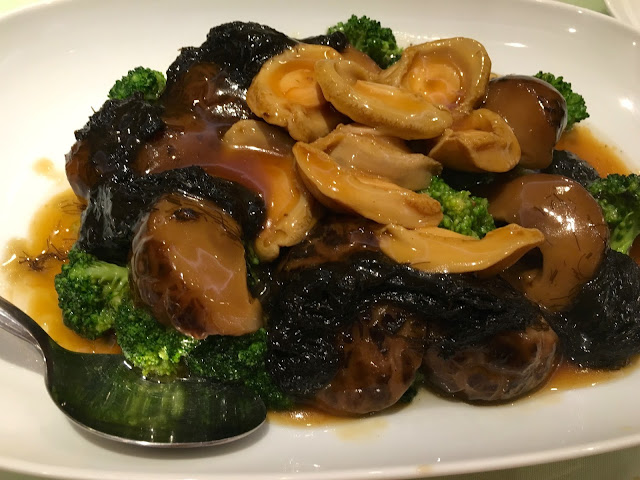 Braised Abalone with Chinese Mushroom, Black Moss & Garden Green 欣欣向荣 (发财鲍鱼扣北菇) is my favorite among all the dishes. The Chinese mushrooms are super thick and succulent, they are the biggest Chinese mushrooms I have seen. Broccoli is tasty with the soya and abalone sauce, the only let-down was the abalone was a little small. 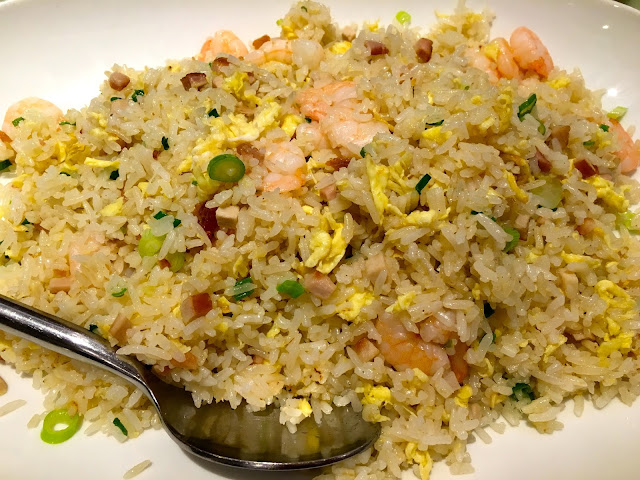 Nothing exceptional about the Yangzhou Fried Rice 五谷丰收 (扬州炒香饭). Just your average fried rice with egg and prawn. It’s a little dry, but edible. If you are looking for a plate of really good fried rice, I recommend Din Tai Fung’s Egg Fried Rice. 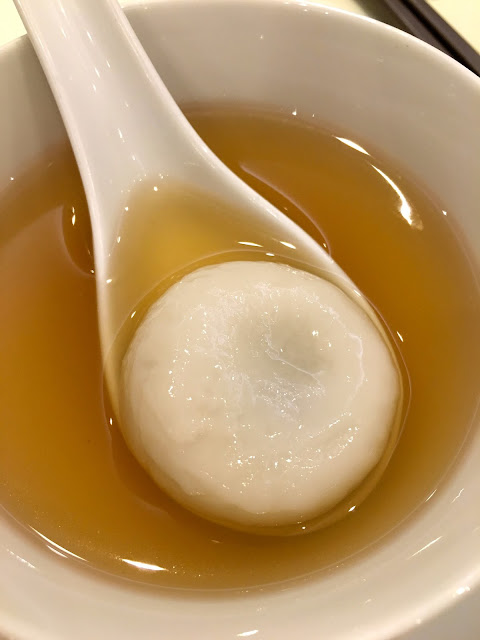 Black Sesame Dumpling in Ginger Tea 美满团圆 (姜汁芝麻汤圆) looks really miserable with just one piece of dumpling, and the dumpling is not even handmade. I won’t order this dessert if given a choice. 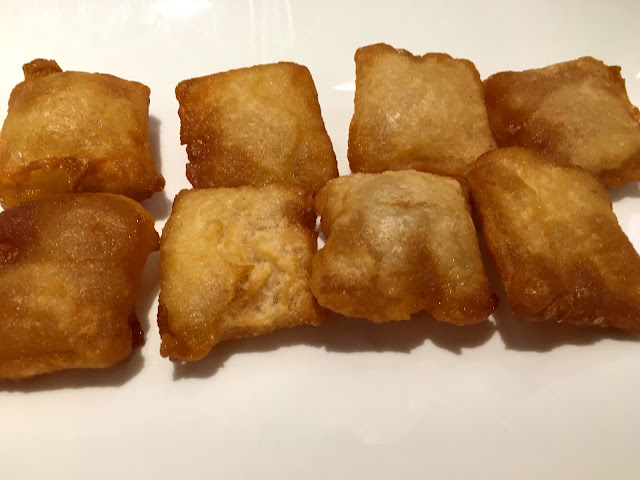 I am loving Pan-fried Sweet Glutinous Rice Cake 年年高升 (香煎年糕). It is an ingenious way of cooking with this Chinese sweet snack. The sweetness is played down slightly by coating it with batter and deep-frying till a beautiful golden color.
This is supposed to be one of the best Chinese restaurant in London, but I find that the food is more of a hit-or-miss than the top-notch quality I was expecting. Lovers of Cantonese cuisine will probably enjoy it more than I did.
Four Seasons Chinese RestaurantAddress: 13 Stamford Road Singapore, Capitol Piazza #02-27/28/29
Telephone: 67021838Opening Hours: 11am – 10:30pm