My colleague, Merilyn and I have been looking forward to trying out the newly-opened outlet of Shabu Sai at Suntec. Just before clinic was about end, Doctor Chong told us that Morganfield’s is having a 1-for-1 Half Slab Sticky Bones to celebrate their 2nd anniversary. As the promotion is only extended till today, we went to Morganfield’s instead.
My only memory of ribs are of those I had many years ago, where I had to cut the meat until my hands were sore only to get a small strip of meat. My first reaction to the word “ribs” is a grimace, but Morganfield’s totally changed my opinion about ribs. 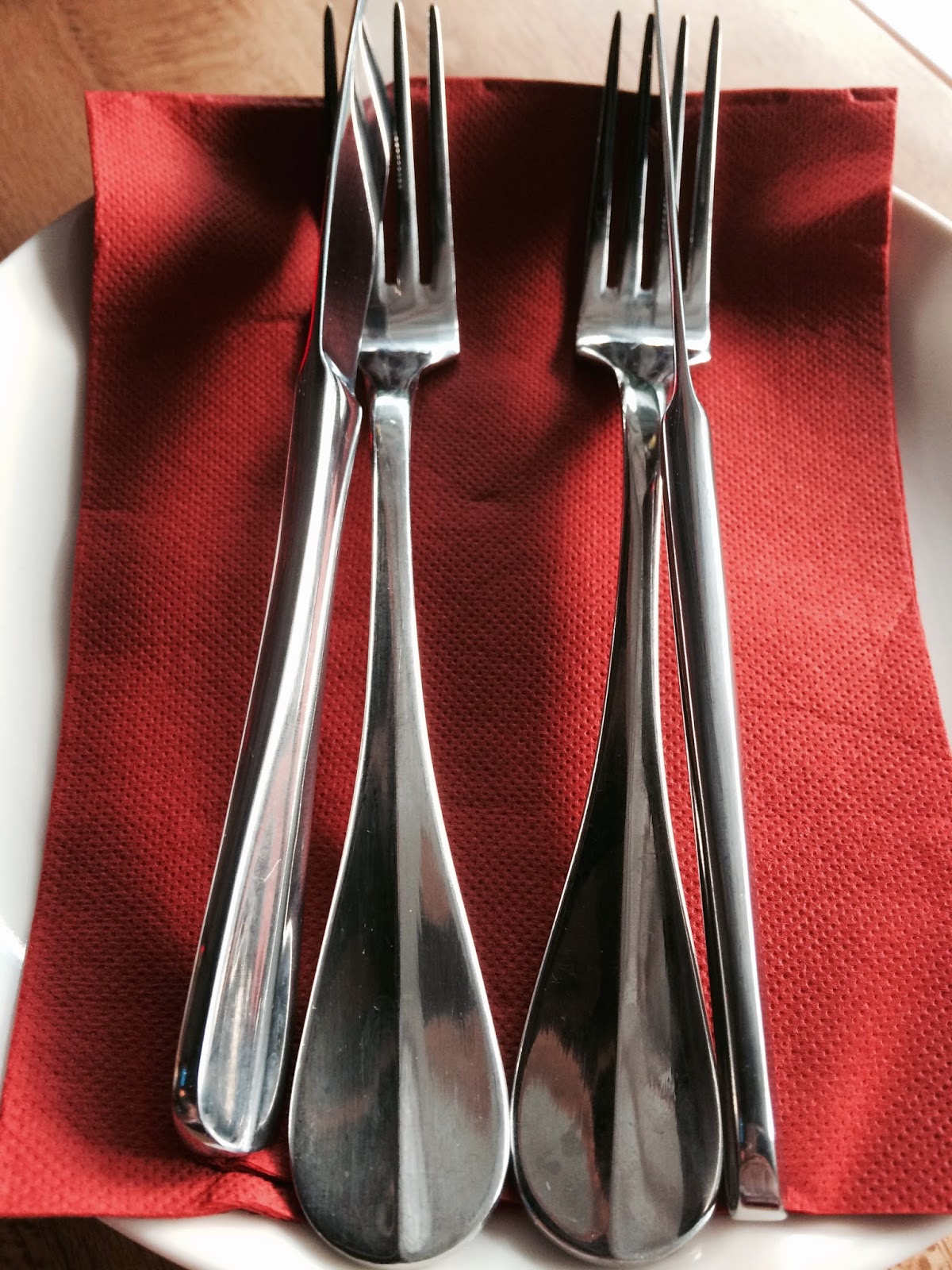 The red napkin underneath the cutleries gives it a very classy feel. 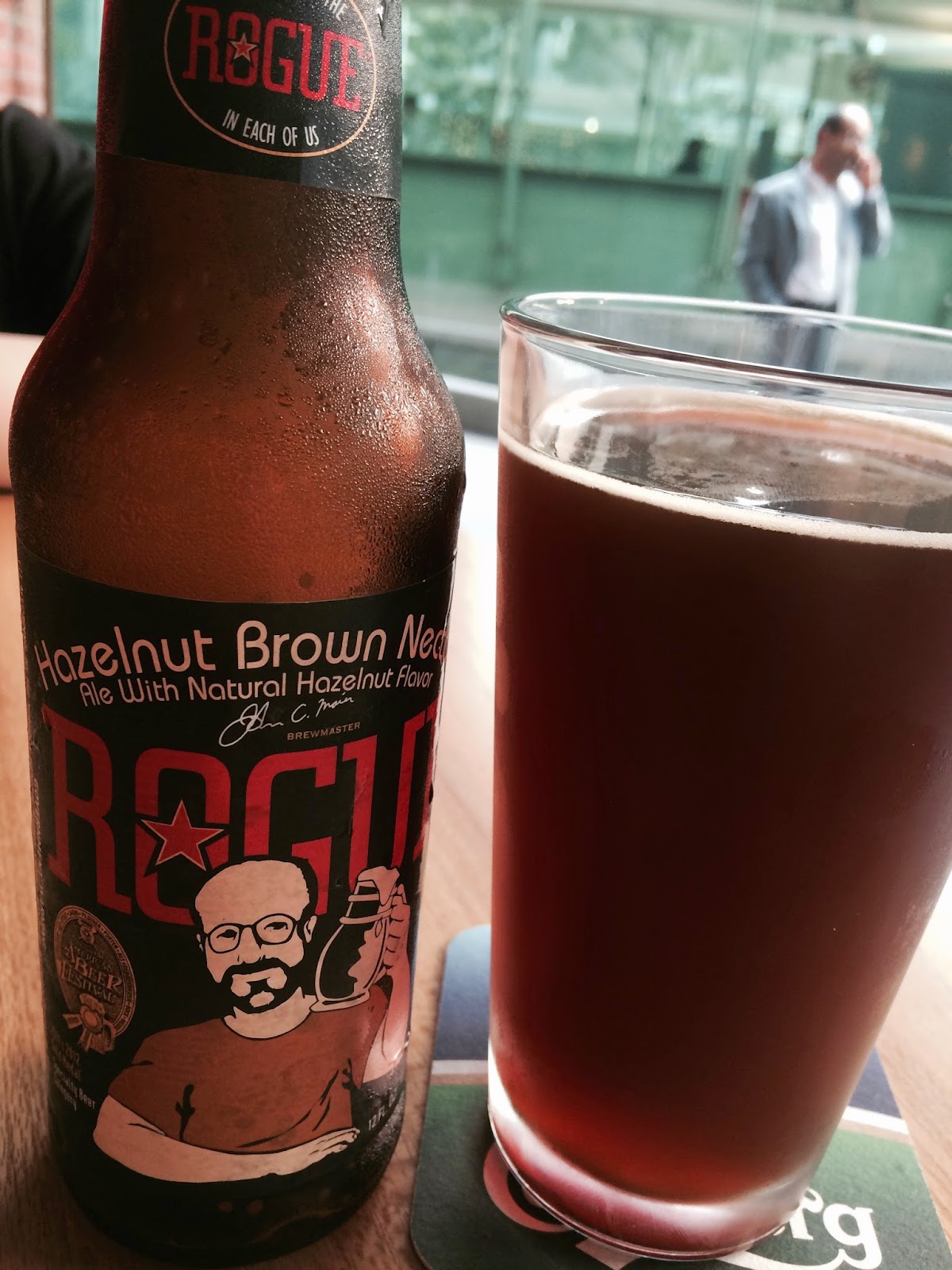 Hazelnut Brown Nectar is strongly recommended by the waiter who took our orders. He says that many customers come back especially for this craft beer because it has a very strong hazelnut taste. I took a sip of my colleague’s order and the hazelnut taste is indeed very strong. 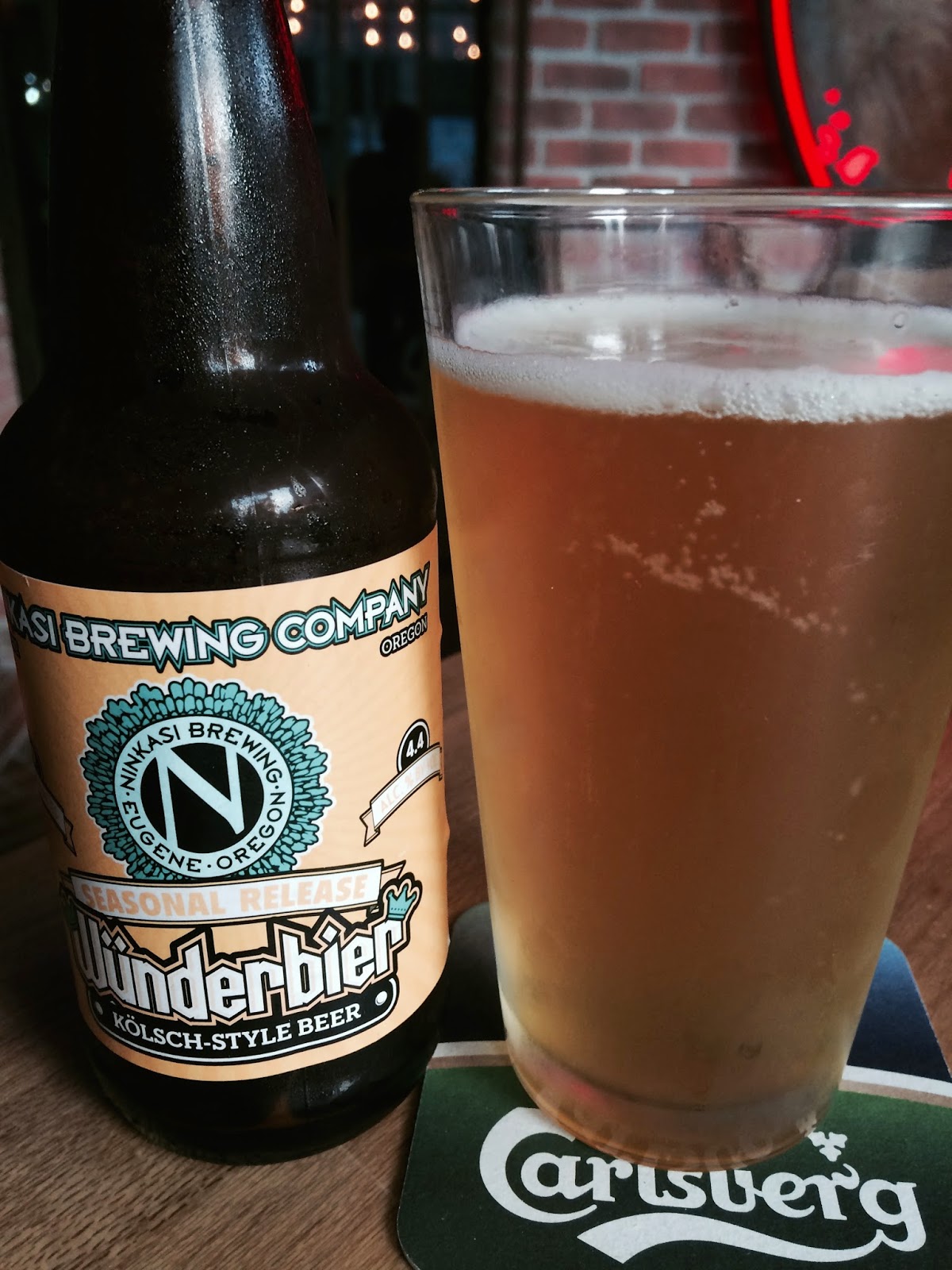 Wunderbier is one of the craft beer on promotion. I am no expert on beers so I shall not comment, but I have to say that an icy-cold beer is definitely the best beverage to go with Morganfield’s Sticky Bones. 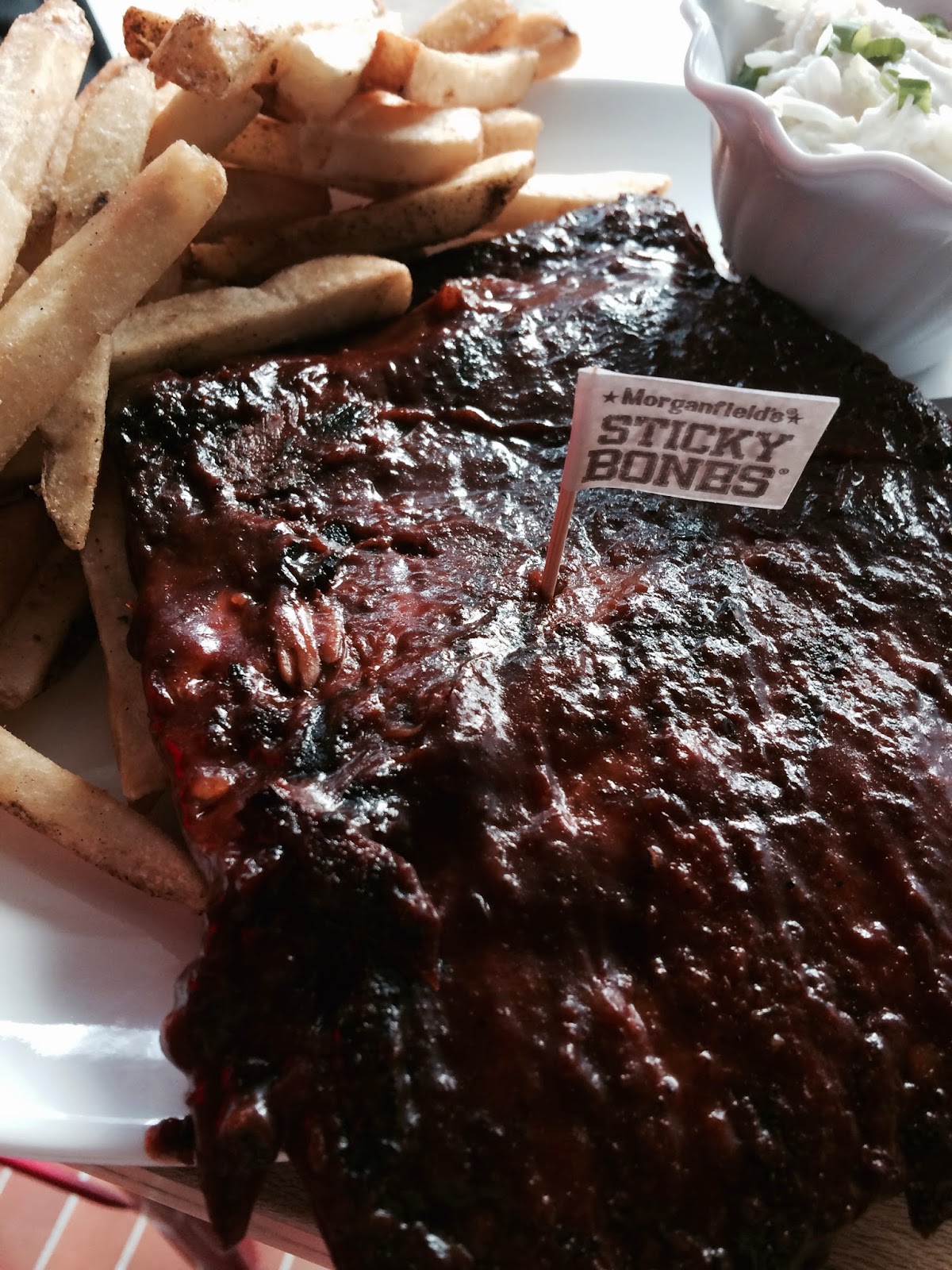 My colleague ordered Hickory BBQ Spare Ribs. The pork ribs are grilled over hickory smoke with Hickory BBQ sauce. The meat fall-off-the-bone tender and every bite fills your mouth with the smoky sweetness. All the fats has dissolved during the grilling, what’s left is the succulent and finger-licking-good meat. 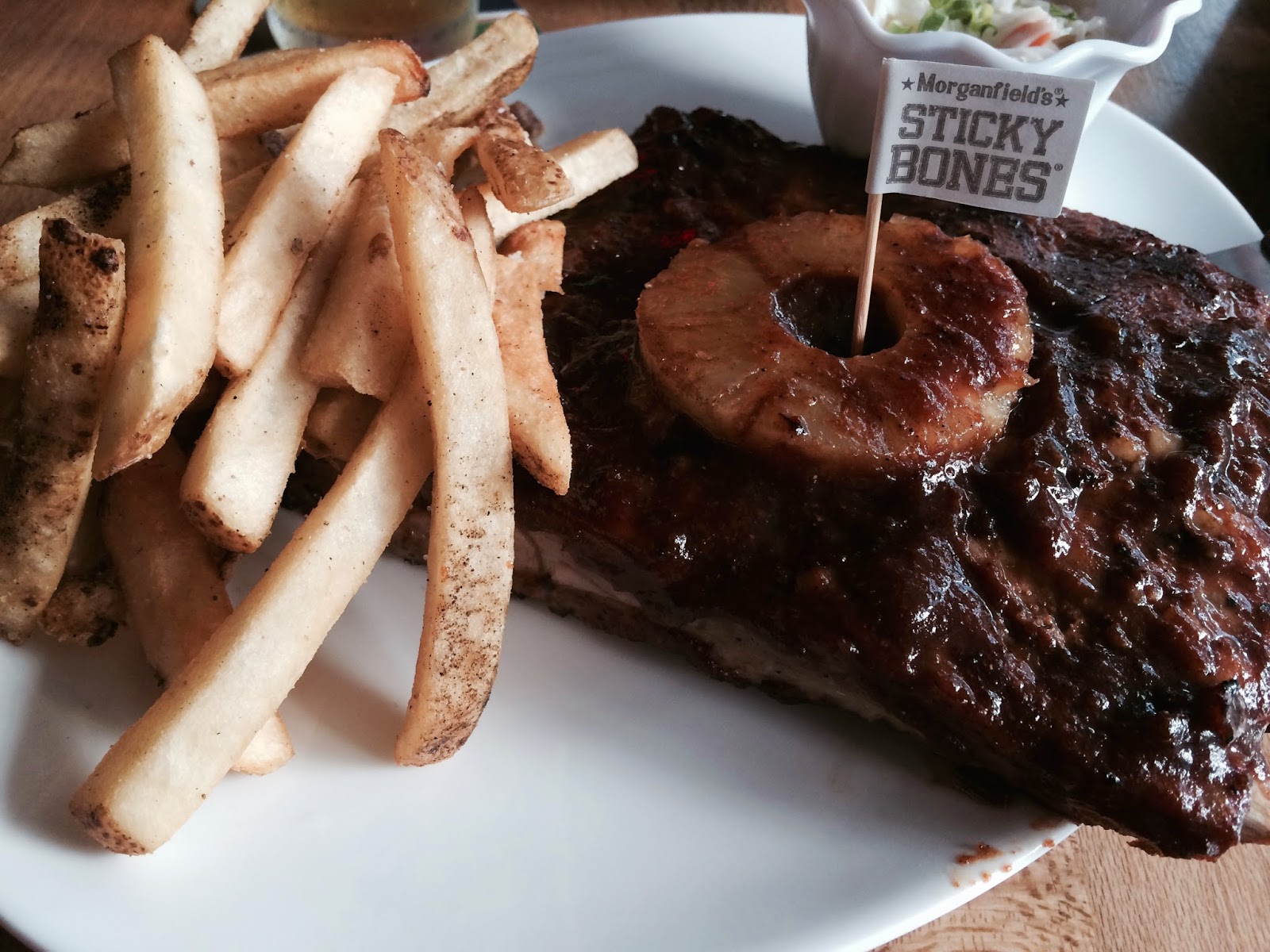 Honey Rum Short Ribs used to be one of the options in the menu, but the chef finds that the Honey Rum sauce is too expensive to be used as a regular in the menu, so it is now a special item that will only make appearance on special occasions such as anniversary. Made with honey, juicy pineapple and Bacardi rum, it is sweeter than Hickory BBQ Spare Ribs and less smoky. The meat is fall-off-the-bones tender, even the soft bones are soft and savoury. Every bite will leave you craving for more.
I am amazed by the sheer size of the spare ribs and the amount of meat it carries. If this is only half slab, how big is the full slab going to be?! Although it was only half slab, it was big enough to make both my colleague and I very full.
For those of you who are not meat-lovers, Morganfield’s also has the classic steaks, lamb chop and seafoods, but do try their Sticky Bones if you can. I guarantee you will not regret it.
With staff who make excellent recommendations and spare ribs this good, I am sure to go back time and again.
Suntec City Mall
Address: 3 Temasek Boulevard, Suntec City Mall #01-645/646
The Star Vista
Address: 1 Vista Exchange Green, The Star Vista #02-23
Telephone: 66943635
Opening Hours: Friday – Saturday & Eve of Public Holidays; 11am – 12 midnight; Sunday – Thursday & Public Holidays  11am – 11pm

If you have any questions, suggestions, partnership and collaboration ideas, please send me an email to hello@hungryghost.sg.