Skip to the content
I have heard so much about Poulet and I walk past it everyday on my way to work from City Hall MRT station. A few months ago, I made a spontaneous decision one day on my way home to have dinner at Poulet. 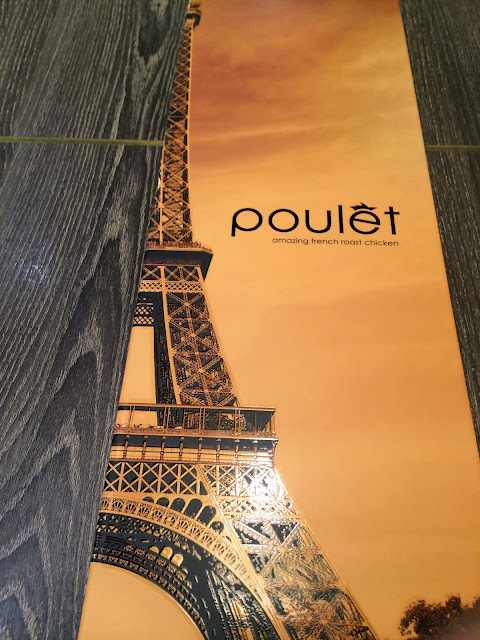 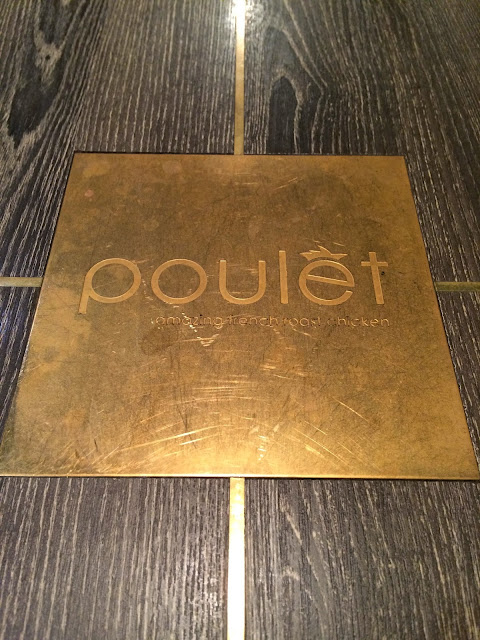 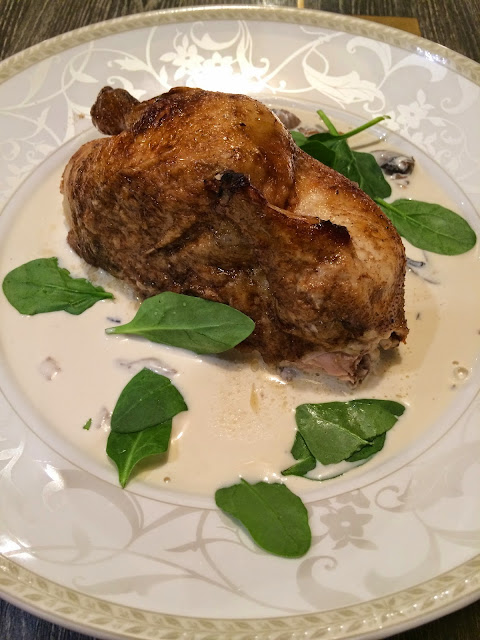 Poulet means chicken in French, hence Poulet is famous for its roast chicken. I had the restaurant’s signature dish, Poulet Roti with Mushroom Chardonnay Sauce. The meat is so tender, they fall right off, and I am talking about breast meat. Mushroom Chardonnay Sauce is creamy and smooth, but I personally feel that it is a little too much when paired with the roast chicken, it gets a little sick to the end. 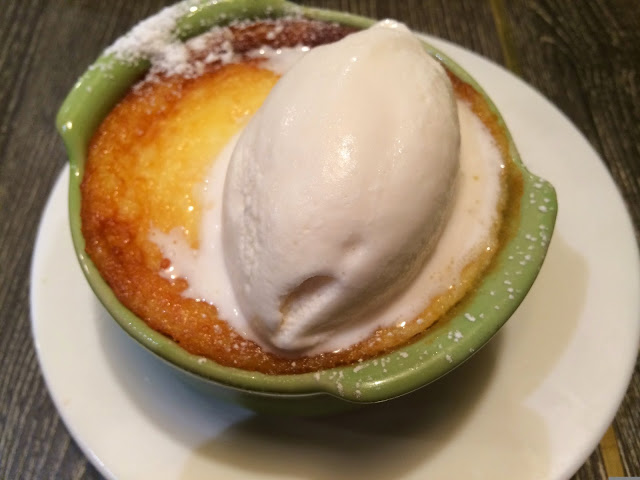 Peach Clafoutis is a French-baked dessert served with a half-peach and vanilla ice-cream. It tastes very similar to bread-pudding. I don’t really like the peach that is hidden in the pudding because I feel that it disrupts the taste of the pudding, but pudding and vanilla ice-cream is still the golden combination.
I have always been so envious of people who can say TGIF because I still have to work half-day on Saturdays. On top of that, I have agreed to give tuition to a friend’s son for his PSLE Chinese after working half-day at the clinic, so normally by the time I reach home my Saturday is almost over before I even have the chance to enjoy it.
Today’s tuition was cancelled, so I have the rest of the day to myself after work at the clinic. To celebrate, I decided to pamper myself at Great World City, a place I have not visited for quite a long while. I will have snacks at Artisan Boulangerie Co. followed by the movie “Hundred-Foot Journey” and end the evening with a delicious dinner at Poulet. 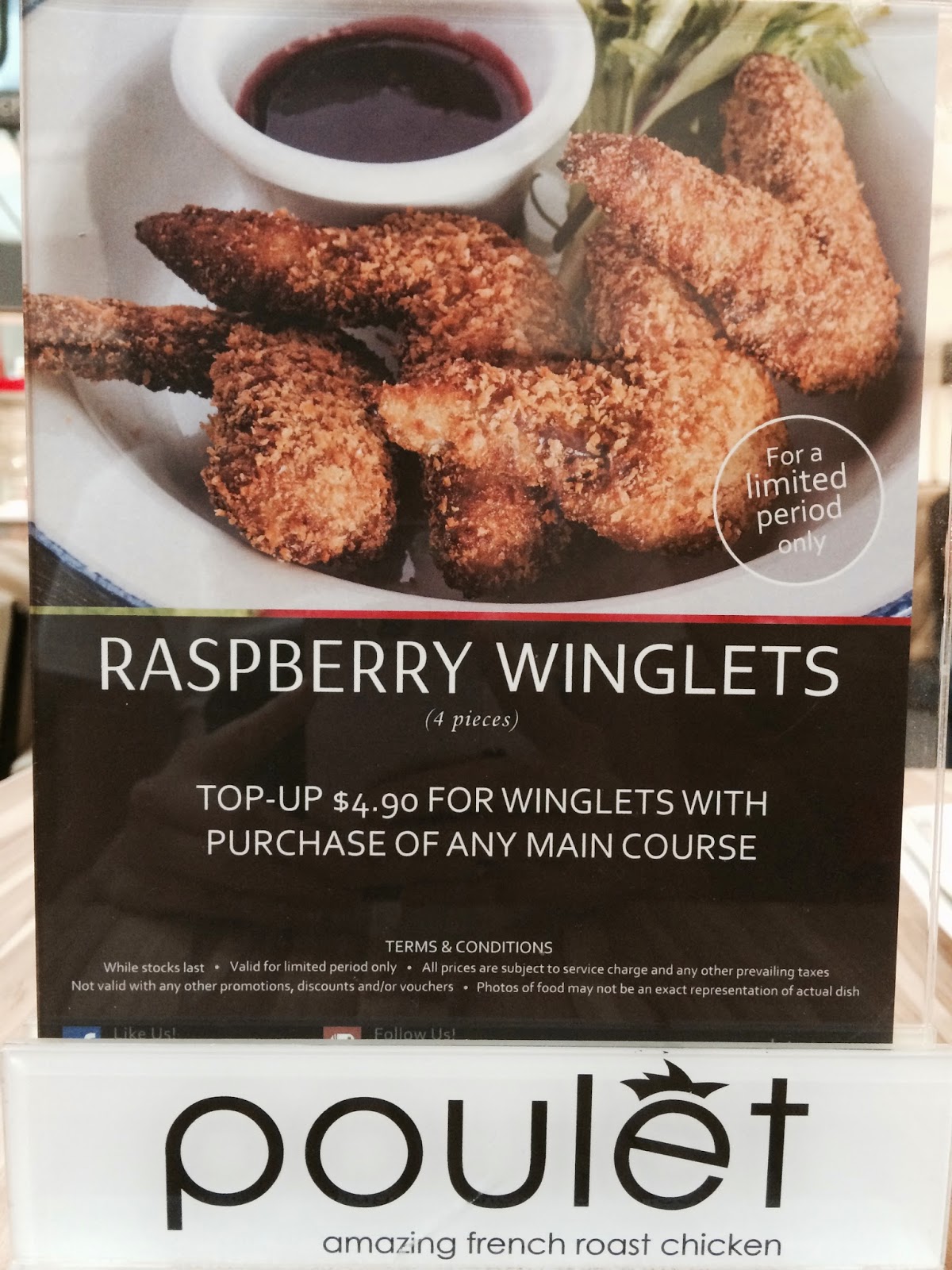 There was a limited promotion of Raspberry Winglets, I decided to try it. 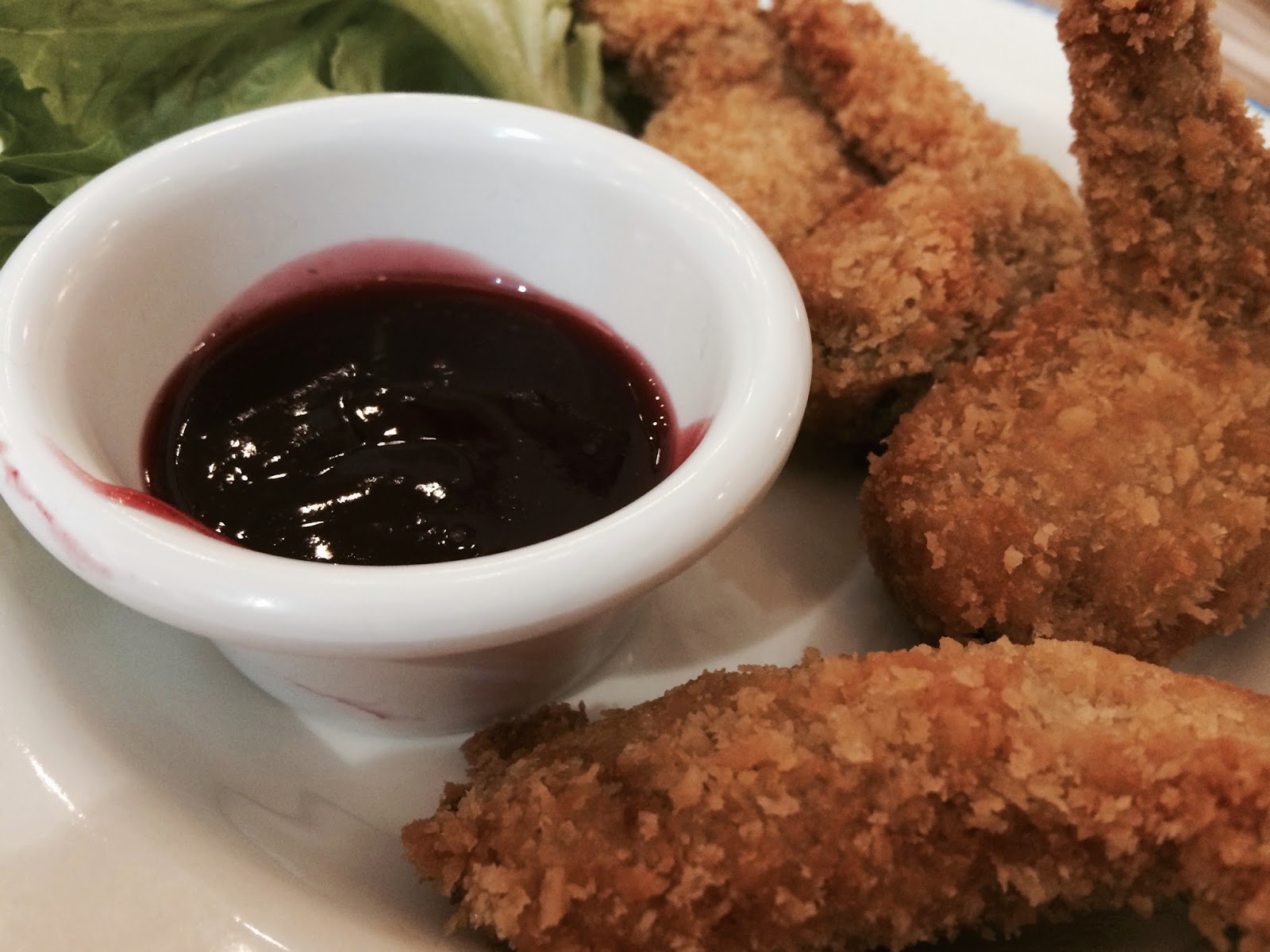 Raspberry Winglet was quite a letdown. The winglets themselves are done very well – the flesh is tender and deep fried to perfection. The raspberry sauce, however, is too sweet. The lettuce that accompanies the dish, which is supposed to make it look appetizing,  is shrivelled and decayed-looking. It is “amazing” how Poulet can serve something of such standard. 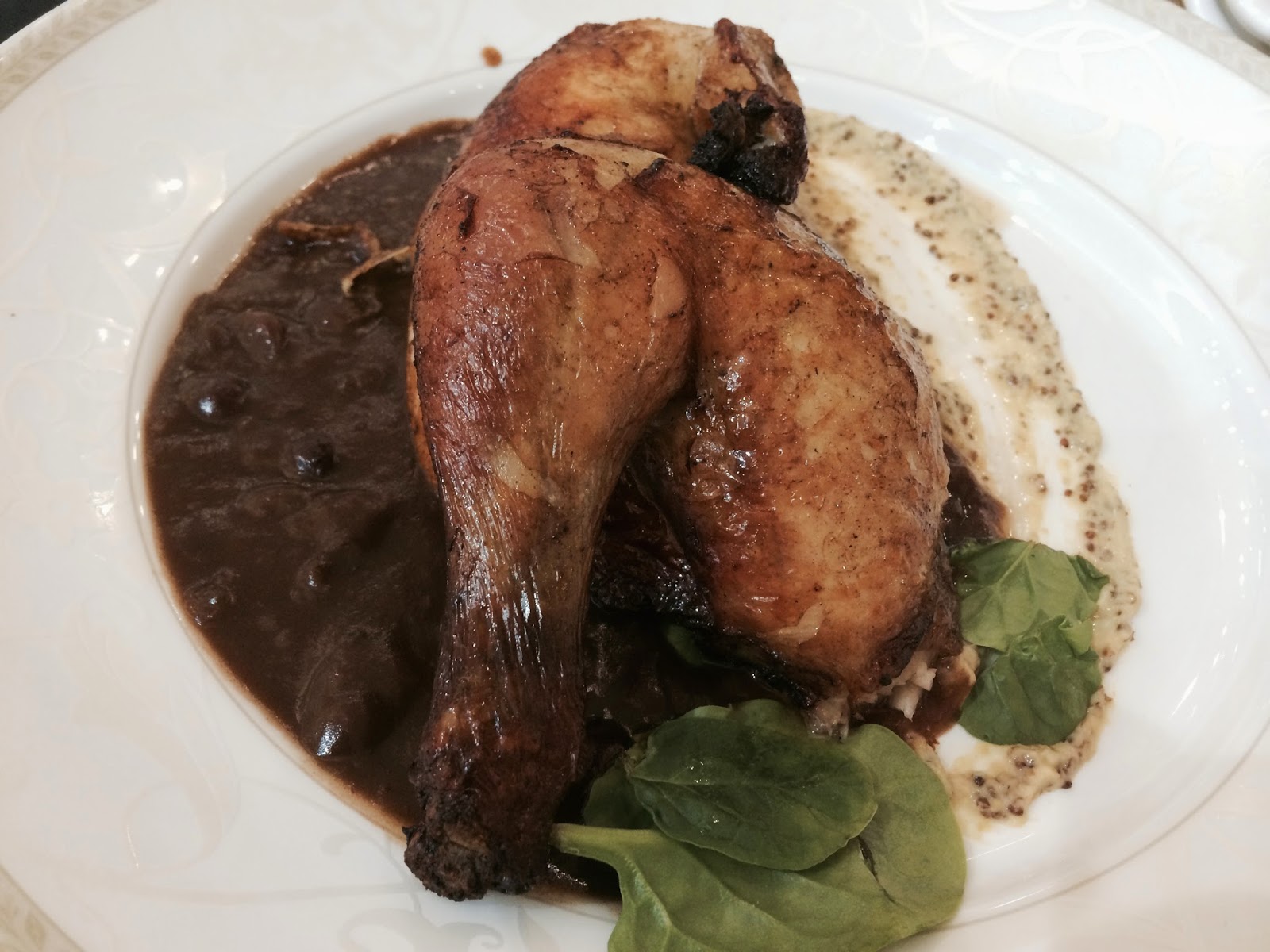 After having tried Poulet Roti with Mushroom Chardonnay Sauce, I thought Poulet de Cranberry might suit me better with the tartness of the cranberry sauce, but I was greatly disappointed. The roast chicken is as tender as always, but the is the cranberry sauce does not look appealing, nor does it taste anything resembling cranberry. The leaves which are supposed to beautify the dish, looks half-dead. I wouldn’t be surprised if this dish has been left out in the open for hours because everything looks dry and wiltered. 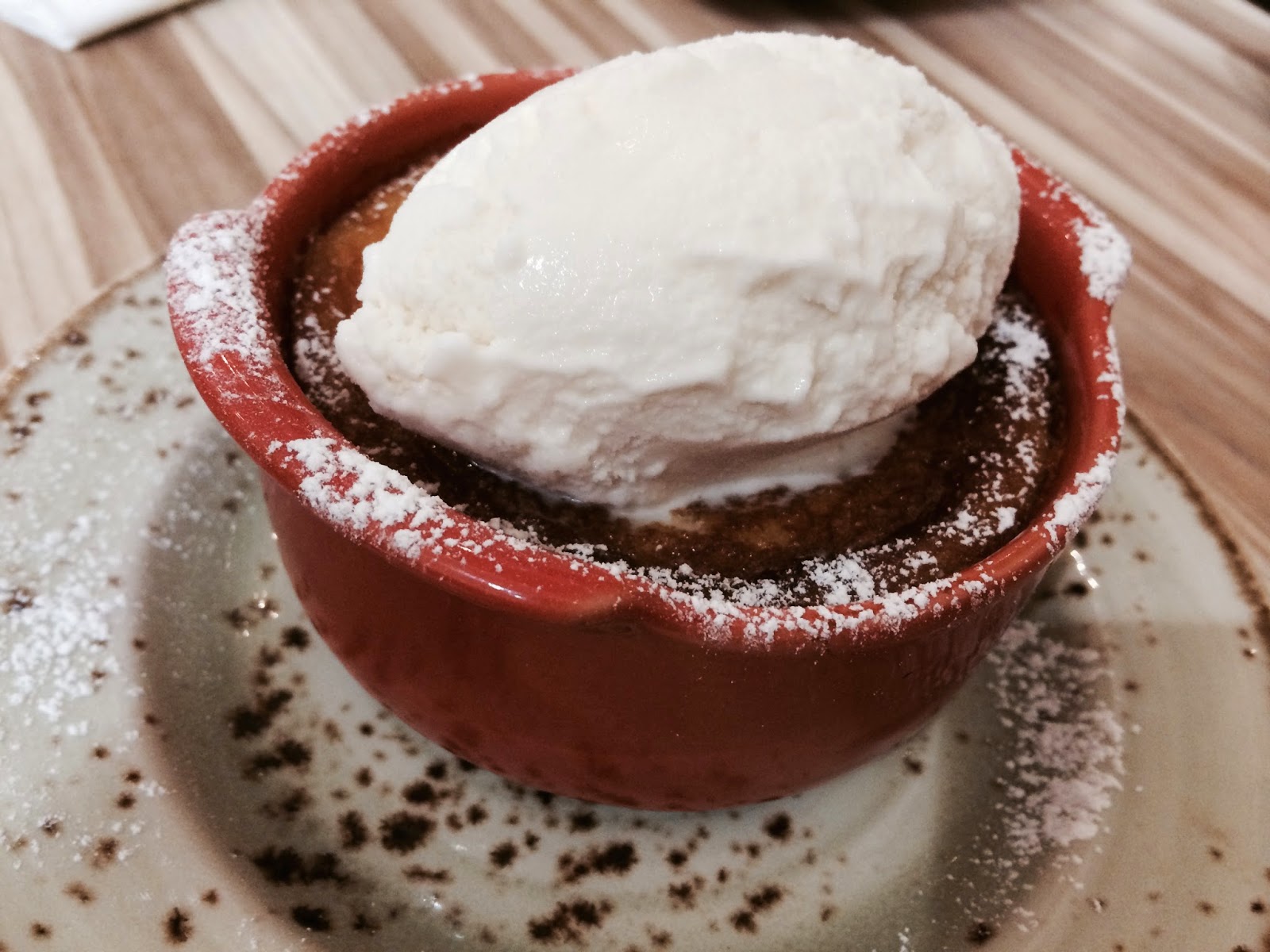 I forgot that I had Peach Clafoutis and I ordered it again today. I still don’t like the peach that is hidden in the pudding.

To say that I am disappointed with today’s meal is an understatement, especially when compared to the excellent meal I had at the Raffles City branch a few months ago. Great World City branch really need to buck-up on the quality control of the food. Although it is almost inevitable that quality of food varies from outlet to outlet, but I don’t think what I was served at Great World City outlet is acceptable at all.

Please find the addresses and opening hours of all 10 Poulet outlets here.